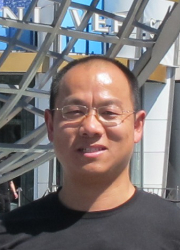 Young Zhang obtained his bachelor degree in physics from Wuhan University of Technology (China) in 2007 and received his Master degree in Microelectronics in 2011 from the Nanyang Technological University (Singapore) after working for two years on induced-transparency in coupled microring resonators. After visiting University of Colorado at Boulder (US) for one-year, he moved to Australia in 2012 to pursue his PhD in CUDOS under the supervision of Prof. Benjamin Eggleton at the University of Sydney. In March 2016 he successfully completed his Ph.D. thesis entitled “Phase-sensitive amplification in integrated Kerr media ”. His Ph.D. mainly focused on the theoretical investigation and experimental demonstration of nonlinear parametric amplification processes in silicon and chalcogenide waveguides. Apart from that, his was also involved in projects of stimulated Brillouin scattering, single photon generation and soliton observation in integrated platforms during his PhD researches.