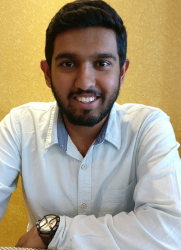 Shashwath Bharadwaj is a Computer Science graduate with a vast research background in multi-disciplinary domains such as Robotics, Internet of Things (IoT), Machine Learning, Signal Processing and Applied Photonics. He received his Bachelor’s degree in Computer Science Engineering with distinction from PES Institute of Technology, Bangalore, India, in August 2017. During his Bachelor’s, he conducted high impact research at reputed institutions such as the Microsoft Innovation Lab of Bangalore, where he directed a team on a project to develop a wearable device for use in remote physiotherapy treatments, and the Indian Institute of Science where he reverse engineered a proprietary sound system to work as a 24-bit parallel optical A2D converter for use in a Near Infrared Imaging system for the early detection of breast cancer. Shashwath received several national and international awards such as the INSPIRE scholarship, Mitacs Globalink Research Internship and most recently, the Globalink Graduate Fellowship for his academic and research merit. His Master’s study at INRS focuses on the development of next generation computing platforms through research in Quantum Optics and Integrated Photonics.