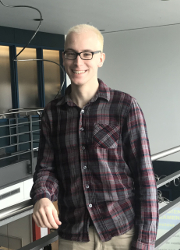 Piotr Roztocki is a physicist with a broad interdisciplinary background, interested in applied and fundamental research in the fields of nonlinear, integrated, and quantum optics. Piotr graduated with distinction in May 2014 from McMaster University in Hamilton (Canada) with an Honours Bachelor of Science in Integrated Science & Physics. This mixed degree offered him the opportunity to focus his studies on physics and photonics, while also providing considerable exposure to other disciplines (biology, chemistry, geology, etc.) valuable in bridging optics to its industrial applications. Piotr was the recipient of two NSERC Undergraduate Student Research Awards, holding research positions at Ryerson University (2012) and the University of Toronto (2013). His work in medical physics, focused on accounting for respiratory motion during radiotherapy (Prof. Emily Heath), and his work in quantum information, focused on numerical approaches to measurement device independent quantum key distribution (Prof. Hoi-Kwong Lo) have been recognized on a national and international scale at undergraduate conferences.

In May 2014, Piotr joined INRS-EMT as a Master’s student under the supervision of Prof. Roberto Morandotti and is a PhD student since September 2015. His research, conducted under a NSERC CGS-M scholarship, investigates the nonlinear dynamics of integrated photonic devices with applications in telecommunications and computing technologies, among others.