Amirhossein Tehranchi received the B.Sc. (1997) and M.Sc. (2000) degrees in Electrical Engineering from K. N. Toosi University of Technology, Tehran, Iran. In 2000, he joined the Iran Telecom Research Center as a faculty member, where he was also involved in research on modulation instability and solitons in optical fibers, and design and fabrication of integrated optics for 6 years.

In January 2006, he started his Ph.D. studies particularly on broadband quasi-phase-matched wavelength converters, under the supervision of Prof. Raman Kashyap at École Polytechnique, University of Montreal and received his Ph.D. degree in Electrical Engineering in June 2010. Afterwards, he worked as a research associate.

Starting from September 2011, he is a post-doctoral fellow at INRS-EMT in Prof. Morandotti’s group, having received an FQRNT fellowship in the first rank.

His research includes all-optical ultrafast signal processing using broadband wavelength conversion techniques based on engineered second-order nonlinearity in lithium niobate and third-order nonlinearity in engineered silicon nano-waveguides. His project currently focuses on the control of the stimulated Raman scattering effect in Kerr media using special pump pulses (e.g., Airy pulses) and its application. He has one granted patent and more than 55 publications.

Although stimulated Raman scattering (SRS) with short pump pulses in optical fibers has been extensively studied in the past, most previous studies used intense optical pulses with symmetric temporal profiles such as Gaussian or hyperbolic secant pulses. Recently introduced in optics literature, Airy pulses have been proposed with their amplitude envelopes defined in terms of Airy functions of time, as temporal analogues of Airy beams. Generation of Raman solitons, based on SRS in fibers, using truncated Airy pump pulses rather than Gaussian ones with the same peak powers and pulse widths is under investigation. 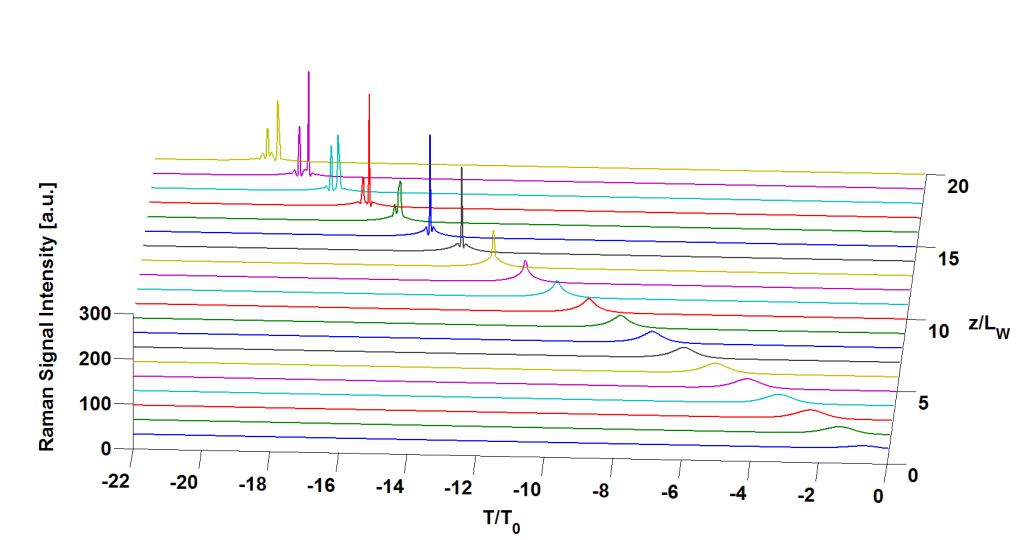 Evolution of a Raman soliton using an Airy pump pulse.