Wave-mixing of terahertz (THz) waves and optical pulses mediated by a Kerr – \(\chi^{(3)}\) – nonlinearity has been investigated in gasses as a mechanism for THz detection and amplification (see e.g. [1–3]). A similar process in bulk samples has been exploited for the detection of long-wavelength radiation, and is typically referred to as electric field induced second harmonic (see. e.g. [4–6]). Furthermore, the possibility of generating THz light from bulk Kerr media has also been theoretically discussed [7,8]. We investigate the four-wave-mixing (FWM) process of intense THz and optical fields in large bandgap dielectrics both for generation and detection purposes.

We started our studies considering a <100>-cut diamond bulk sample, due to its transparency to both the THz and visible radiation. We considered the interaction between intense, 90 fs long THz pulses delivered by a mid-IR pumped plasma source [9] and 60 fs long pulses generated by a Ti:sapphire source at a wavelength of 800 nm. Our results show that both sum-frequency (SF) and difference-frequency (DF) generation occur and that the latter is phase matched in a counter-propagating geometry, i.e. for the THz wave propagating in the opposite direction to that of the optical pump [10]. This may pave the way to novel THz detection schemes and hints toward further investigations on the counter-propagating geometry for parametric processes involving long-wavelength pulses. Furthermore, we have shown that by exploiting the four-wave mixing between THz and optical fields in diamond it is possible to perform THz beam-profiling and imaging, employing standard optical components such as CCD cameras.

Fig. 1. (a) Spectrogram of the FWM signal as a function of the pump-THz pulse delay, normalized at each delay step (Log-scale). (b) Same as in (a) but on an extended delay interval and normalized to the maximum (Log-scale). (c) Experimentally recorded duration tau of the DF signal for different crystal thicknesses L. The dashed line is the duration.

For plane and monochromatic waves the FWM processes occurring in diamond can be described by two processes, namely Sum- and Difference-Frequency Generation, satisfying the relations:

respectively (p, T, SF, DF stand for pump, THz, Sum Frequency, and Difference Frequency signals). The SF and DF signals are blue- and red- shifted, respectively, with respect to the second harmonic of the visible pulse and the two components are expected to beat while varying the THz-pump phase difference. We have experimentally recorded the spectrum of the wave-mixing signal as a function of the temporal delay between the THz and the pump pulse, as reported in Fig. 1a. For small delays the spectrogram shows indeed a modulation that is consistent with the expected beating between the SF and DF signals. On the other hand we observed the appearance of a long lasting signal that extends for several picoseconds (clipped in Fig. 1a for clarity purposes and shown in Fig. 1b). This is a signature of a counter-propagating interaction between the optical pump and a reflection of the THz pulse from the output facet of the diamond sample. In a counter-propagating interaction, the delay-dependent signal is expected to extend along the delay coordinate \(\tau\) for:

where \(v_{g,T}\) and \(v_{g,p}\) are the THz and optical pulse group velocities, respectively. We prove this hypothesis by recording the signal for crystals of different thickness, namely 50, 100, 300, and 500 μm as shown in Fig. 1c, (blue dots) overlapped to the analytical prevision (red dashed line). The clear match supports our claim. We also recorded the FWM signal obtained by directly injecting the THz pulse counter-propagating with respect to the optical field. By evaluating the coherence length \(L_c = \pi/|\Delta k| \) for the different FWM processes the counter-propagating DF results the phase-matched interaction up to nearly 10 THz. Similar results have been obtained with other transparent media. Our results may open the way to further investigations on parametric processes involving near- and far- infrared radiation in Kerr media, eventually resulting in the possibility of their exploitation into a guided geometry. 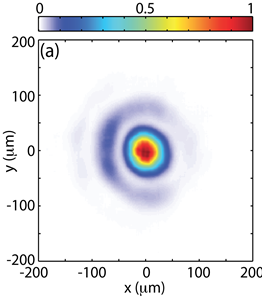 We have also shows that spatially resolved FWM between THz fields and a near-infrared probe in large band-gap (solid state) Kerr media can be employed for THz beam-profiling and imaging via standard CCD cameras. Similarly we have demonstrated a novel technique for space-time resolved measurement, i.e. a 3 dimensional tomographic reconstruction of the THz pulse (3D-mapping [11]). In order to prove the THz imaging capabilities of FWM we employed a 500 μm thick, 4 x 4 mm aperture, <100>-cut, single crystal diamond sample as the nonlinear medium and we overlapped the THz field with a collimated, 795 nm, 60 fs duration probe pulse, passing trough a 1.5 mm diameter hole in the THz focusing mirror. When the THz and the probe overlap, wave-mixing occurs and a signal proportional to the THz intensity is generated at a wavelength close to the probe second harmonic (400 nm, note that for low conversion efficiencies \(I_{WM} \propto I^2_{probe} I_{THz}\) ). We removed the probe fundamental harmonic with a suitable band-pass filter and we imaged the diamond surface onto a cooled CCD camera (620i, QSI). In Fig. 2 we show the recorded image, acquired averaging over 100 laser shots, and for 350 uJ probe pulses energy.