A Faraday isolator is an electromagnetic non-reciprocal device. It is required to shield electromagnetic sources against the detrimental effects of back-reflected light. Although it was proposed by Rayleigh [1] and demonstrated in various spectral regimes, it has been so far absent from the THz regime due to the limitations on handing the associated broad bandwidth. The THz isolator requires a broadband non-reciprocal phase retardation of 45º. This has always been extremely challenging to achieve over a wide bandwidth. We have recently demonstrated an isolator based on a magnetic non-reciprocal retarder operating with broadband THz pulses. Our device depends on permanently magnetized Strontium Iron Oxide (SrFe12O19), where Faraday rotations up to (194º/T) were obtained [2].

Nonlinear Interaction of Intense THz  and Optical Pulses in Air

We are investigating the effects of the nonlinear interaction between THz and optical pulses in air. The experimental layout follows the scheme proposed by Dai and coworkers [1]: the THz pulse is overlapped, in air, with a probe, 800 nm pulse. The electric field of the THz pulse breaks the isotropy of the air medium and creates an effective second order nonlinearity, χ(3)eff  ∩ χ(3) ETHz, with ETHz being the THz electric field. The probe pulse therefore generates an “Electric-Field-Induced” Second Harmonic (EFISH) signal. Differently from the standard Air-Biased Coherent Detection (ABCD) technique [1,2] where the Second Harmonic (SH) of the probe beam is measured with a photodiode, we spectrally resolved the wave-mixing signal. 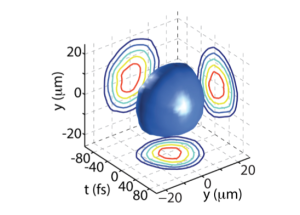 Wave-mixing of terahertz (THz) waves and optical pulses mediated by a Kerr –χ(3)– nonlinearity has been investigated in gasses as a mechanism for THz detection and amplification (see e.g. [1–3]). A similar process in bulk samples has been exploited for the detection of long-wavelength radiation, and is typically referred to as electric field induced second harmonic (see. e.g. [4–6]). Furthermore, the possibility of generating THz light from bulk Kerr media has also been theoretically discussed [7,8]. We investigate the four-wave-mixing (FWM) process of intense THz and optical fields in large bandgap dielectrics both for generation and detection purposes.

Intense THz pulses are required for the fundamental investigation of nonlinear light-matter interaction and several techniques could be adopted to generate an intense THz wave. For instance, when a two-color laser pulse (fundamental and second harmonic) ionizes a gas, an intense and linearly polarized THz pulses is emitted [1,2]. Although peak fields as high as 500 kV/cm have been reported with this technique [3], saturation effects limit the intensity scaling of the THz emission and increasing the pump pulse energy does not always results in higher THz fields. We are currently investigating possible ways to enhance the THz emission from gas ionization. 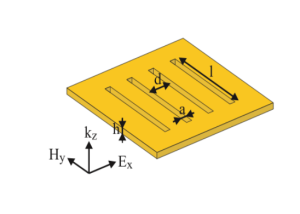 Since the first report of high optical transmission in subwavelength hole arrays1, transmission and field enhancement properties of electro-magnetic waves in subwavelength metallic apertures have drawn much interest2. In the THz regime, field enhancement is of importance due to the present technological limitations in the peak fields, obtainable from current THz sources, that limits the realization of nonlinear THz experiments. Recently, Seo et al. 3 reported a field enhancement factor F approaching 780 at 0.1THz using a single 70nm wide slit etched in a thin gold film. A single slit can be depicted as a nanocapacitor loaded with the charge collected by the surrounding metal surface. 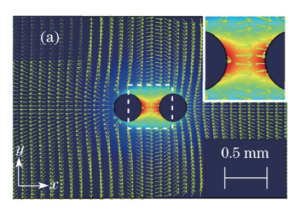 Terahertz (THz) waveguides are the subject of an intensive research aimed at transferring THz radiation over long distances while preserving the pulse amplitude and phase. Standard approaches are not suitable since most of the THz generation techniques deliver extremely large bandwidth pulses, corresponding to single-cycle electric wave packets, which will strongly disperse in dielectric waveguides. This issue is even more important considering that one of the main applications of THz radiation is time-domain spectroscopy, where the temporal coherence of the probing pulse is a must. On the other hand, dispersion-less waveguides have been known at longer wavelengths, e.g. microwave and radio-signals, for several years [1]. 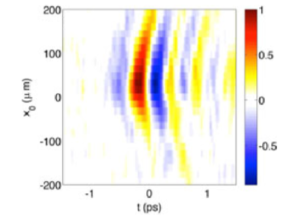 Terahertz (THz) imaging emerged as a distinguish technique for material analysis and characterization in security, military, biomedical, pharmaceutical and aerospace sectors due to its significant capability in extracting the information of material thickness and density [1]. Spatial resolution of THz imaging is strictly limited due to its long wavelength (100-1000um) lies between the infrared radiation and microwave radiation. Several near-field techniques have been successfully implemented to obtain subwavelength resolution in THz imaging, involving the subwavelength apertures, tips, or other spatial discrimination in raster scan on the sample to be imaged [2,3,4,5]. 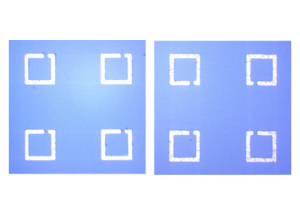 The performance of conventional metamaterial designs typically suffers from low quality (Q-) factors owing to ohmic and radiation losses. Hence, a drastic improvement is desired that can be achieved by novel and innovative structures for metamaterial unit cells. Asymmetric double split ring resonators (aDSRs) have been proposed at microwave and terahertz frequencies in order to achieve high Q-factors in a planar structure [1]. In this project, we show that a super cell made from four mirrored asymmetric single split ring resonators (mASRs) sustains an ultra-sharp inductive capacitive (LC) resonance feature that arises from the antiparallel currents excited in pairs of mASRs [2].