Non-diffractive Airy beams recently attracted a great of attentions recently [1, 2]. Their unique properties led to many applications, such as curved plasma generation, particle manipulations, surface plasmon routing, electron acceleration, etc [3]. Since the first prediction and experimental demonstration of optical Airy beams, many efforts have been made to maintain or control their self-accelerating trajectories in both linear and nonlinear media. Unfortunately, nonlinearities tend to destroy the phase of Airy beams and thus to break down the acceleration, especially under the action of a self-focusing nonlinearity. 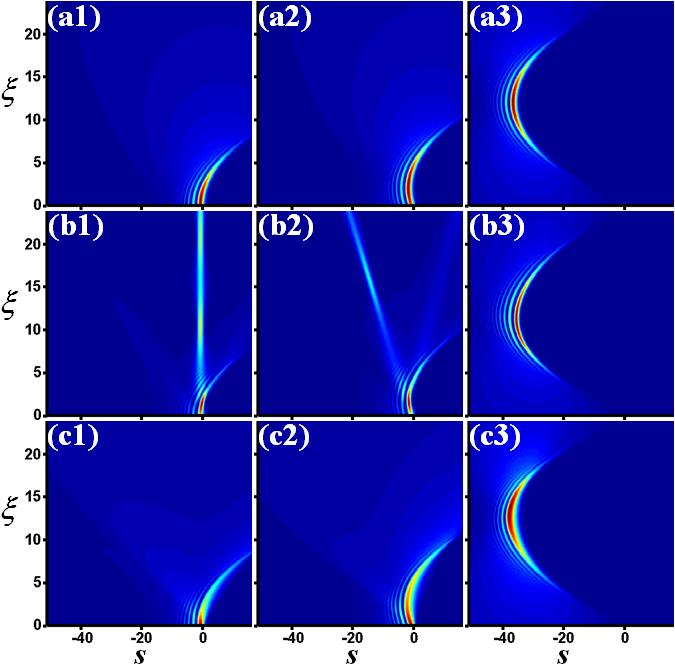 In our project, we propose a scheme to control both the trajectories and the spatial spectra of nonlinear Airy beams. By altering the initial conditions via laterally shifting the cubic phase mask coded on a spatial light modulator (SLM) [4], we demonstrate experimentally and theoretically that a finite Airy beam can change its trajectory while maintaining its acceleration in a nonlinear photorefractive medium(see Fig. 2).

Furthermore, the spatial spectrum reshapes dramatically during nonlinear propagation, leading to positive (or negative) spectral defects under a self-focusing (or -defocusing) nonlinearity (see Fig. 3). Such peculiar nonlinear phenomena may find applications in beam/pulse shaping as well as in laser filamentation and plasma guidance [5].