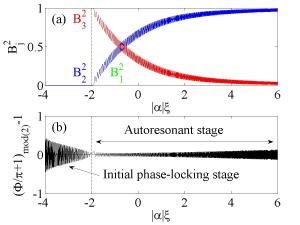 Three-Wave Mixing (TWM) processes appear in many fields of physics e.g. nonlinear optics, plasma physics, acoustics and hydrodynamics. In TWM, the sum of the frequencies of two waves is equal to the frequency of the third wave (ω1 + ω2 = ω3 ). Recently, a general theory of autoresonant three-wave mixing in a nonuniform medium has been derived analytically and demonstrated numerically [1]. It has been shown that due to the medium nonuniformity, a stable phase-locked evolution is automatically established. For a weak nonuniformity, the conversion efficiency between the interacting waves can reach almost 100% of the pump energy (see Fig. 1).

Efficient SHG with the Longitudinal Temperature Gradient along LBO Crystal

One of the potential applications of this research is the design of highly-efficient frequency doubling devices allowing complete depletion of the pump wave [1]. This kind of devices is expected to have a very large conversion bandwidth with a flat conversion spectral profile, similarly to what have been suggested and demonstrated in the case of four-wave mixing in tapered optical fibers [2]. As a first step towards the realization of the project we demonstrate an efficient technique for the second harmonic generation (SHG) based on the temperature gradient along a nonlinear crystal.

Non-diffractive Airy beams attracted a great of attentions recently [1, 2]. Their unique properties led to many applications, such as curved plasma generation, particle manipulations, surface plasmon routing, electron acceleration, etc [3]. Since the first prediction and experimental demonstration of optical Airy beams, many efforts have been made to maintain or control their self-accelerating trajectories in both linear and nonlinear media. Unfortunately, nonlinearities tend to destroy the phase of Airy beams and thus to break down the acceleration, especially under the action of a self-focusing nonlinearity.