Prof. Morandotti’s research chosen as one of the top ten discoveries in Quebec.

For the second year in a row, a scientific advance by Professor Roberto Morandotti’s team at the INRS Énergie Matériaux Télécommunications Research Centre has been chosen as one of the top ten discoveries of the past year by Québec Science.

A team of researchers has demonstrated that on-chip quantum frequency combs  (light sources comprising many equally-spaced frequency modes) can be used to simultaneously generate multiphoton entangled quantum bit (qubit) states. This kind of complex quantum states forms the base to build quantum computing  applications. The fact that the involved technologies are compatible with CMOS and fiber optic transmission, renders it more important for future developments and brings us closer to the era of quantum computers. 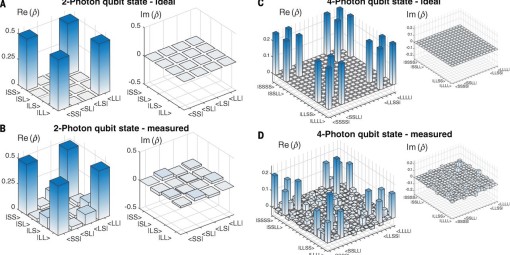 A quantum state can be fully described by its density matrix [insert lowercase rho-hat here]. The real (Re) and imaginary (Im) parts of the ideal density matrices of a two- and four-photon entangled qubit state are shown in (A)and (C) respectively, represented in the time-bin basis (|SS〉, |SL〉, |LS〉, |LL〉) and (|SSSS〉, |SSSL〉, ⋖|LLLL〉).The measured density matrix of the two-photon state (A) grees very well with the ideal state, confirmed by a fidelity of 96%. The measured density matrix of the four-photon entangled qubit state (D) reaches a fidelity of 64%, which is comparable in quality to other nonintegrated four-photon states (3)