Prof. Morandotti and his collaborators reported the first observation of laser-assisted channeling and bending of electric discharges around an obstacle. 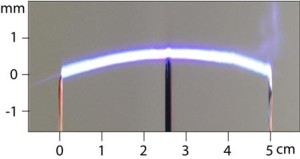 Our research, published on the journal Science Advance, shows a way to guide electric discharges along particular bending paths. By manipulating the specific shape of a laser beam, using an accelerating Airy beam, it is indeed possible to precisely control the trail of a spark. Along these lines, parabola-like and S-shaped electrical discharges can be achieved, thus transporting the electrical charge around objects that would have otherwise completely blocked the discharge itself. Another important attribute of an Airy beam is its ability to spontaneously reform its main intensity features after encountering an obstacle (self-healing). We also show that the self-healing properties of Airy laser can be readily transferred to the electrical discharge, which also self-heals and resumes its original trajectory even after a direct hit on an obstacle. The discharge can be manipulated in such a way that the resulting arc can bypass an object placed in the line of sight between the electrodes.

Also, see the video on the Discovery Channel Tube: https://www.youtube.com/watch?v=eBzxn2LEJoE

And the Article on the Daily Telegraph