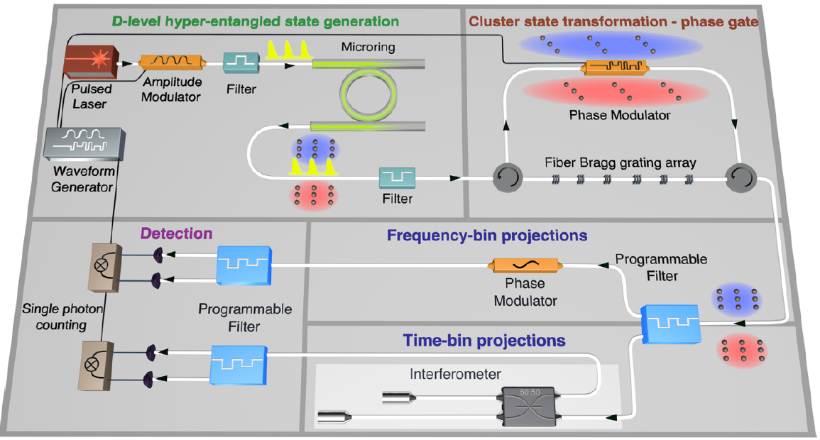 Quantum information science focuses on the realization of large-scale complex quantum systems to enable, e.g., ultra-secure communications and computations faster than classical approaches. In this context, ‘cluster states’, a specific class of multi-partite entangled states, are of particular importance, since they can be used to realize one-way quantum computers. While qubit cluster states have been realized so far, increasing the number of particles to boost the computational resource comes at the price of significantly reduced coherence time and detection rates, as well as an increased noise sensitivity. The use of qudit entangled states has the potential to address the several limitations of qubit cluster states.

In a scalable quantum platform, we demonstrate the realization of a four-partite three-level cluster state by making use of just two photons that are simultaneously entangled in time and frequency. Furthermore, via projection measurements, we perform d-level one-way quantum processing operations on the realized cluster state. From these operations we realize orthogonal, maximally entangled two-partite states that were validated via quantum interference measurements. We finally validate the genuine four-partite entanglement through a novel witness as well as show d-level cluster states are more noise tolerant than their two-level counterparts.