Prof. Morandotti and his collaborators demonstrated the possibility to manage the collapse of a two dimensional, multicolor beam in an instantaneous Kerr medium. 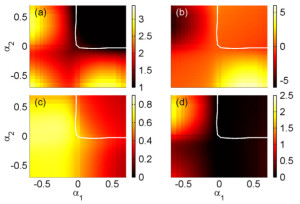 This work demonstrates, theoretically and experimentally, that a four-wave mixing parametric interaction is able to arrest the collapse of a two-dimensional multicolor beam in an instantaneous Kerr medium. We considered, two weak idlers interacting via a third order nonlinearity with two pump beams and we show that a class of collapse-free quasi solitary solutions can be experimentally observed in a normal dispersion Kerr glass. This observation is sustained by rigorous theoretical analysis demonstrating the stability of the observed self-trapped beams.

Such result opens the possibility of managing the collapse dynamic of an optical beam propagating in a pure Kerr material by addressing its mutual interaction via parametric four-wave mixing (FWM) with an additional control beam. It is also expected that this technique will allow the generation and study of X waves, optical pulses with a characteristic X shape in the space-time or angle-wavelength domain.